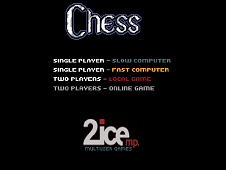 Chess is, as you know, a logical game so you have to do your best in order to prove that you are the greatest chess player ever, in this cool and so incredible gaem, alongside your favourite chess pieces, black and white, typical for each chess game. Do not forget that it is important for you to select the game mode so play in one player, against the computer and one player also has two different ways: fast computer and slow computer. Make the right pick and start chasing the only goal, winning! You can either play in two players and in two players online, so there are a lot of possibilities for you. Good luck in this cool and so amazing challenge and move the right pieces, as you know the rules, in order to capture the opponents' ones and of course, to block his other ways, winning the game. In the right side of the game screen, there is a white panel, where there are shown to you the captures from each side, either the pieces captured by you or the ones which used to belong to you, but now captured by the opponent. Good luck and do not waste too much time for thinking the moves, but think fast!