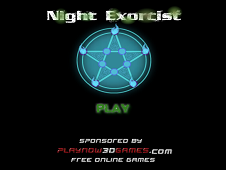 What is Late Night ?

Late night, in the night of exorcism, the goal is to avoid getting slaughtered by monsters, ghosts and so many evil spirits, all of them meant to stop your existence because you've just passed their territory and they want you to get in their possesion, especially your soul so this way become a puppet of them. This thing won't happen, because your hero has such a pure soul that he would rather die fighting then getting possessed by the ghosts and spirits so let's start it right now. Use the arrow keys in order to move there in that kind of cemetery and use the up arrow to jump over tomb stones. Then, when a monster comes from your face, use the SPACE bar to shoot with some special bullets and projectiles, in order to kill them and watch their spirits get out of the possessed bodies. There are also bigger coffin which have inside them a couple of weapons you would rather use for keeping yourself even more away of those creatures. Good luck and let's get this mission started as soon as it is possible, shooting the monsters and killing every single opponent as soon as it is possible!