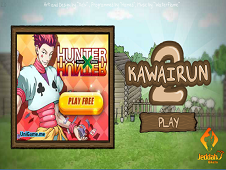 Kawairun 2 is such a great and so cool adventure, where you have to run with your white and always smiling character, which is so nice looking. Right now, the goal is to use arrow keys in order to move with it, wherever it takes in order to make sure that you will dodge all the obstacles, avoid the traps and of course, for this you need to press the up arrow key, in order to jump over them. There will be so many fallen tree bodies and this kind of obstacles, some puddles sometimes and this kind of dangers, which don't seem to be so dangerous, but they are lethal for you character. Firstly, use the up arrow to jump as it is necessary for dodging a single obstacle so after this, go forward and try a mix of keys, like up and left arrow keys at the same time, in order to do some different movements, all of them meant to make you achieve a higher score than the previous one. Good luck and pay close attention to the details, making sure that you won't blow it. Do not sink, do not fall and do not get touched by any other foreign dangerous body so let's do it as soon as it is possible. This is the second version of the Kawairun game so the adventure is double!