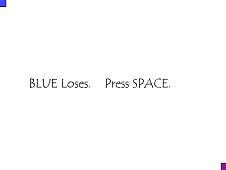 What is 2 player snake games?

2 player snake games is a new game that we added today in the 2 Player Games category. As you already know by the title of the game, this will be a snake game but played in 2. This game can be played by you and your friend, brother, sister or classmate in the same time at the same computer. In this game you will use the arrow keys, the space bar and the W,A,S,D keys. First of all, this game has not sound and the backgrounds game is white which can be a good thing or this can mess you up because it can be strident. To begin the game you have to press the space bar, after you pressed the space bar you will use the arrow keys to rule the blue snake which is in the right bottom corner and using the W,A,S,D keys you will rule the purple snake which is in the top left corner. For a good game you bought have to rule the snakes in the same time because if you press wrong, you will have to begin again the game by pressing the space bar like you did for the first time. This could be a hard to play game but is very funny when you play in two. Good luck!

Use the arrow keys, the space bar and the W,A,S,D keys.