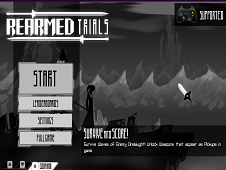 What is Armed with Wings Rearmed?

Armed with Wings Rarmed is such a great adventure, where you have to fight so many other players, in the online or local save. The goal is to kill them all as soon as it is possible, so the fighters from this game, are rearmed from the last time you've seen them. After joining the game, a player will be given to you, a real fighter master. Your goal is to use the arrow keys in order to move, wander there all over the game screen and use the D key for dodging the opponents of your player and of course, use the S key and the bottom arrow key, in a mix, for a super attack. Wait for the attacking meter to load and then strike simply. Strike just like this with the A key too, with no other complications, simply striking and make sure that at the end of the game, you'll be that one standing and not down. Good luck and let's start this great and so cool mission, and pass to the other level in the shortest time. Use your insight and ability in this incredible fighting mode and unlock new levels. Everything adapts after your movement but the opponents so you're gonna be hosted pretty hostile!