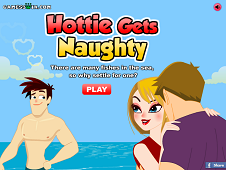 What is Hottie Gets Naughty?

Hottie Gets Naughty is such a cool and amazing ability game, about a beautiful young girl, that's why she is named hottie, and this awesome bunch of boys on the beach, all of them sexy and looking for a chick just like this one. She is interested in them too but the only problem is that she has a boyfriend but she doesn't wanna be loyal anymore so that's why you are present here, in this cool and so awesome challenge, with this beautiful hottie on the beach. She is wondering herself why settleing at a single boy, when there are a lot of guys waiting for her. She don't wanna say this straight to the face of her boyfriend, but cheat on him. Use the mouse in order to click on different tools and things from all next to the place she and her boyfriend are staying right now, in order to distract her boyfriend, then click on the target boy, in order to watch him so lovely, then acting naughty. All of these are interrupted after a while when the exclamation mark appears on the game screen, which means that your boyfriend is going to watch you soon, so then release the mouse for stopping watching the other boys!