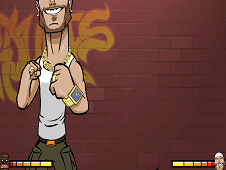 What is Kfed Dancing With Fire ?

Kfed Dancing With Fire is such a great hitting and punching game, where you have to beat a couple of thugs from the neighbourhood, all of them so rich and arrogant, but this is just going to change in the following game. You are hired to beat until their last breath at the moment, some thugs, characters, rich arrogant boys, it doesn't matter but you only have to kill them all. Let's start with the very first task, which consists of hitting until he falls, this guy, a white man, with a lot of bling blings and such a coward. At some point, after you'll damage this guy a little, he will even get him wife in front of him, alongside his child, in order to get protected behind them and this way you'll have a triple task because now you have to try to hit him, dodge his punches from behind his wife and also, to avoid hitting his wife and his child either. This is such a difficult task, but only the first one so unlocking the others, you'll see that it is getting more and more difficult. Good luck once again and pay attention to the details! In the bottom side of the game screen, there are shown to you the amount of health left for any of the fighters so make sure that you'll make him run out of it!