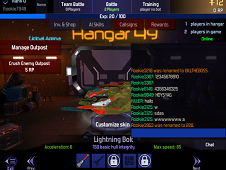 What is Space Merchants Arena ?

Space Merchants Arena is a great shooting game, where there are involved so many spatial ships, all of the meant to stop you from achieving your duty, requested from different other guys, who have payed you for this, because you are working as a merchant. If you thought that only on Earth there are merchants, you'll be surprised to find out that there are merchants in space either so let's start dealing with them, trying to successfully kill the other players, to unlock different spatial ships for you from hangar and after this, become the kind of the known space. In hangar, you can customize your ship before starting the race, switching the skin or different colours on it for design. After winning a couple of spatial battles by accomplishing your duties, you'll receive some money which you can use for buying and unlocking new weapons and guns. Let's start it right now and become the most feared spatial merchant from the whole Universe. Good luck once again and do not forget that it is so necessary for you to be a master in this Arena! Use the mouse either to move or to shoot so aim rightly too!