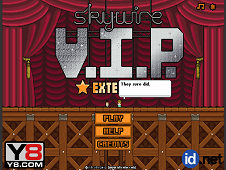 What is Skywire VIP Extended?

Hello guys and welcome back to another great and so cool challenge, alongside a couple of animated characters, from their world, in this pixeled game named Skywire, the VIP Extended edition. Firstly, you have to know that it is so important for you to recognize the characters which are coming with that special cabin, on the steel wire, all the time. There are coming, all the time, in every single level, different animated characters, but they are from some TV animated series so you have to recognize them. In the bottom side of the game screen, there are some blank spaces, where you have to write down the title of the series they play in, so let's start this challenge as soon as it is possible. The characters are little and far away from your sight so that's why it's so difficult for you to guess them from the very first attempt. Also, you have an amount of time available so check it in the top side of the game screen, to see how much do you have until you run out of it. Next to the writing spaces, there is the amount of letters written correctly by you so that is a kind of hint for you!