March of the Cards 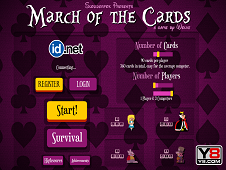 What is March of the Cards?

March of the Cars is definitely the game to play but firstly, it's highly recommended for you to ask a couple of friends to try this game alongside you, because it could be played in two, three or even more players at once. This incredible and so amazing game, offers to you the occasion to use the arrow keys or the A, S, D, W keys in order to move and wander there, with your special army, all over the game screen soon, in order to dodge the other armies and attack them when you want it, not when they want it. Start this challenge now and every single army, has a different colored dress up outfit so you'll recognize it after the clothing. At the beginning of the game, each army stays in its own corner so from there it starts everything. Good luck and do not forget to be the greatest when it comes to this multiplayer adventure game, and build up the greatest strategy for fighting and the one who stays alive at the end of the battle, wins. Complete this task now and do not stop until you'll find the victory path, with your srmy, over and over again. Compete against your friends and win!