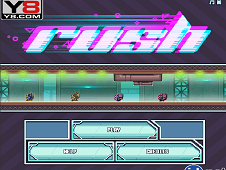 Rush is such a great and so cool ability, insight and 2 player game, which challenges you to use the particular key for every single player, in order to jump or switch the surface you are running on, in order to control your player the best. This game is recommended to be played in more players than one, in two players, three or even four. The purpose is simple, so there will be four different paths for the players where you will be running on so pressing the special key for each character, you can switch the gravity and if you keep the key hold, it will help your player accomplish a flip. Let's start this challenge right now and rush to be the first one who reaches the end of the race, at the final lap. Dodge the platforms which are meant to slow you down and collect the necessary bonuses or coins or super powers, temporal ones, which may give your some power or speed boosts. Good luck in this awesome and fantastic challenge and rush so much to reach the end of the race, the very first one, in front of the rest of the other players, competiting alongside you. Rush so much to make the effort worth!