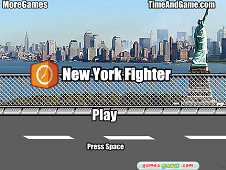 What is New York Fighter ?

New York City is a pretty dangerous city because of its size firstly and then, because of the many thugs which are there, who are trying to hurt you so much for no reason, even to beat you until you get killed. Let's start this challenge right now and become a really great fighter, trying to beat and kill the thugs, who are trying to beat you. Show them and there is no place for unnecessary violence by beating them so hard that they won't be even able to move. The funny thing about this fantastic game is that it's a multiplayer task, which can be played in more players so let's start this challenge right now and make sure that you'll ask a friend to play with you and this way, you'll be in control. They are more than you if you play it single so kill them with force and team work. Use the arrow keys and the 1 and 2 keys if you are player 1 and if you are player 2, you will use the J and K keys to hit and jump. Good luck and do not stop until you finally become the greatest fighter in the whole New York City! Be so insight and full of fighting ability and try this multiplayer task right now, beating stickmen. If they've punched you, you have to restart everyting!