Panda in The Desert 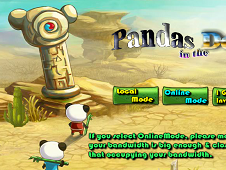 What is Panda in The Desert?

Panda in The Desert is a new two players game, but it can also be played in a single player mode, if you control both characters. You can play this game home with a friend, or also online if you have an invitation or if you go on a server. There are two pandas that need to be controlled in order to get to their specific doors. They can be moved using the arrow keys and the WASD buttons. There are also some crystals over the map that will grant you extra points. At the end of each level there will be shown how many crystals has each player got. You will also see a map with all the levels you have completed and how many levels are available. There are also a lot of obstacles that you need to avoid and doors that need to be opened in order to reach the end of the level. Sometimes you will need to do some specific actions with one of the pandas, and a different one with the other, this is why it is easier to be played with a friend than alone. The game also has a nice background music that might help you finish the levels faster.

Use the arrow keys and the W,A,S,D keys