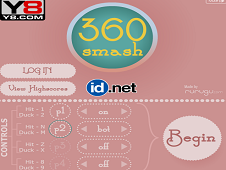 360 Smash is such a great ball hitting or dodging game, which offers to you the chance to gather up a couple of friends to play this game alongside you and then make sure that you will smash that ball successfully, by hitting it or dodging it, how you consider. There is a circle, and in two, three or four different sides, judging by the amount of players you wanna play with, there will be a player. If you wanna play the multiplayer version, you have to activate the players in the beginning of the game so if you wanna play against the bots, there is nothing left to do but begin the challenge. Go for it now and once the ball reaches your player, either hit it with the 1 key, or dodge it with the 2 key, how you consider that it's required. This way, you'll try to make the other player confuse and make the ball hit him. Once the ball hit a player, that player is eliminated and instantly has lost. The ball will be spinning 360 degrees around the huge circle so if you are too late, you will be smashed by that ball and you'll lost. Get to the work right now and prove your ability!