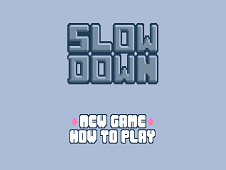 What is Slow Down ?

Slow Down is such a great shooting, dodging, collecting and multiplayer game, which brings you the opportunity to use the arrow keys, A, S, D, W keys, or another keys from the keyboard, depending on how many players you are playing this game, in order to destroy your opponents. You can't play this game only against a couple of friends so ask at least one of them to play with you or even three other gamers, to start this challenge again each other. Your characters are some little monsters, who are looking forward collecting as many gems as it is possible. The game map is a room full of platforms so run and wander there, jumping from platform to plaform, to collect the gems and also, shoot your opponents, to make sure that when the time will be ran out, you will have collected more gems than your opponents, each of them. The gems disappear once collected by you but they get back soon in the same places so be ready. In the top side of the game screen is the timer so hurry up. If you get killed by the shots of your opponent, you'll restart the mission from the up platform and you'll waste some time!