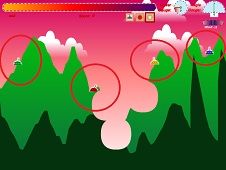 What is Scorched Earth Flash?

Scorched Earth is such a great and so cool mutliplayer shooting mission, which offers to you the occasion to use the arrow keys in order to successfully aim the target and then start the shooting session, with a couple of heavy projectiles, all of them meant to destroy the lands and earth from there, wiping the whole earth trace on the game screen. There are mountains, fields and different this kind of special earth, which must be eliminated as soon as it is possible and there are many players to try this task. The two players, because you can only play at least in two players, stand in the same place, at the beginning of the game but by shooting the earth under you, you can move wherever you want during the game. Shoot the masses of earth and make sure that you will destroy everything in your way, getting the whole gaming map empty in the shortest time possible. Good luck and make sure that nothing bad will happen in this incredible and so fantastic task, scorching the whole earth and make sure that you will destroy the most, with your own player!