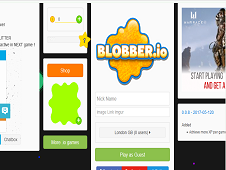 Blobber.io is such a great io online multiplayer game, similar with the other ones just like it, like Agar.io but the difference between these two is that in Blobber.io, the characters of the players are some random shaped creatures, not some well featured ones. Not some slimes, but something almost similar but however, the purpose is the most important. Once you've played as guest or whichever game mode you want, you need to start gathering up and collecting as many little glowing dots as it is possible, in order to increase the size of your little character. Let's start this challenge right now and the bigger you get, the more chances you has to eat the other opponents because once you are bigger than them, getting in touch with them will automatically serve them an unwanted game over! You'll control the whole character's movements with the mouse so make sure that you won't blow it. Become a real master in this incredible task and do not forget that you are the greatest in this special collecting, increasing and eating io online game, with players from each corner of the world!