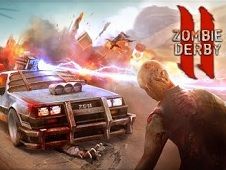 What is Zombie Derby 2 ?

Zombies have just started their freshest attempt of killing and wipping out of the Earth the mankind so that's so bad, but it is even worse for them, because they don't even know what is waiting for them! You'll be the hero of the humanity, killing them all as soon as it is possible, but for this, you need to get through every single level successfully, with no too many damages and of course, with so much rage and desire of killing them. Let's start with the very first level so drive your super heavy zombie killing truck! This huge car is almost indestructible so only if you crash it so much it wouldn't be able to be driven again. Use the arrow keys to control its direction on those off roads and also the SPACE bar in order to shoot with the cannon, which has such a powerful laser and different weapons, which definitely kill the zombies from only one shot. If you missed them, you would be able to kill them by smashing them with the super truck. Jump over the obstacles if you can't destroy them, applying your speed boast, with the left shift key and while the truck is in the air, control its balance with the arrow keys too!