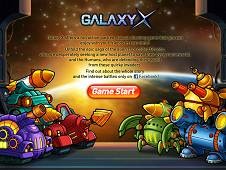 What is Galaxy X ?

In Galaxy X, you have to deal with all kind of special robots, some kind of spatial tanks, which are so well armed and their weapons are as powerful as the nuclear ones. This cool and so incredible game, offers to you the chance to use the arrow keys to move on the planet from the Galaxy X, an unknown galaxy yet for the human, only known by the spatial soldiers, who are trying to conquer it, seizing their purpose, to get it in our territory. However, there are some powerful fighters, and you are going to find out in the following moments why, who would give anything to fight and keep their planet only for them so you have to kill them and prove that you are much more powerful than them. Use the arrow keys to move and the SPACE bar to aim and shoot when it's your turn, with your spatial tank and aim and calculate the angle perfectly for the shot, and then just release the rocket to the target. Good luck and have so much fun in this cool, awesome and so incredible shooting accuracy game, in Galaxy X, where your shooting experience and ability is so necessary in this critical moment!