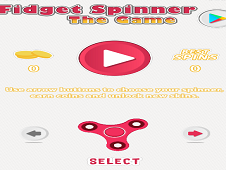 What is The Fidget Spinner Game?

The Fidget Spinner Game is a new awesome game in which you are going to play with the new and the coolest toy of the year: the fidget spinner. The game rules are really easy and it is really fun to play: you will need to use your mouse in order to spin the toy as fast as you can and make it spin as much as it can in order to win more coins that you will be able to use in order to buy awesome upgrades or a new fidget spinner. You will see how many coins you have earned in total at the top left corner of the screen. Each bonus will make you spinner go faster and resist longer. Also you may want to buy some new spinners because some might be better than your old ones. It is a game that can be played for lots of hours because you can never really end it as you can always buy new upgrades and new toys and make your spinner the best one of the game. You can spin your spinner three times in a row and then you can look at the top of the screen to see that speed that it reached. Have fun while playing with the awesome toy.