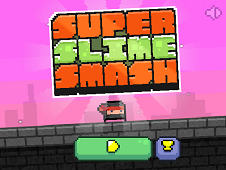 What is Super Slime Smash?

I guess there is no need to explain what do the slimes because you already know that they are some little green colored crawling creatures, who are trying to smash your character in this special ability and insight game, where the fun comes out of killing the slimes. If they want a battle, give them the war so turn against them, trying to smash them in order to kill them all, as soon as you can. Smashing isn't that easy so do something quickly and walk from side to side with your ninja and then, using the up arrow key, jump on their heads to make them vanish and disappear as they've arrived, out of the blue! Make sure that you won't only smash them but collect the points too for increasing your final score. The more slimes you kill and smash, the higher will be your final score so do your best and do not forget to be a real master in this challenge. Also, there will be falling some kind of boxes, which you really need to dodge and avoid so jump above them too, to make sure that you will smash them for extra points in the end either. Let's start it as soon as possible and conquer this mission!