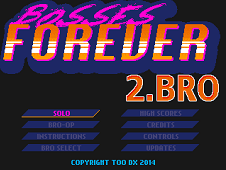 What is Bosses Forever 2 Bro?

Bossses Forever 2 Bro is a great ability and retro arcade game, where the graphics are the same old ones, but the action of the game is really perfect. Firstly, you should know that you need to beat so many bosses there, in order to kill them all to gather up so many points, using them as a reason for your high score at the end of the game. It's so important for you to beat all the bosses, as soon as possible, because you will meet so many of them there, in this map with dungeons and not only. Your character can be controlled only with the D and A keys in order to move left or right and also the SPACE bar is the key for a jump, higher or lower. Also, you need to use the J key in order to aim and shoot the opponents, who are actually some bosses, as you already know. Good luck and get rid of all the bosses as soon as you can to make sure that you won't be disturbed by any of them during your action there. Kill them all now and pay close attention to every single detail during your fight and never become a victim, but also the one who conquers the battle!