Toys Shooter: You Vs Zombies 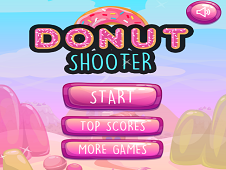 What is Donut Shooter?

Donut Shooter is such a great shooting game, but this time you won't use any bullets to shoot opponents or enemies, not even some balls to remove the other balls or bubbles, but something different than usually, some special donuts! Yes, you've heard so well, some donuts! In the top side of the game screen, there will be some donuts, randomly arranged there so you have to aim and shoot them, with the donuts cannon in the bottom side of the game screen. In that cannon, there will appear, after every single shot, another donut, different colored so you have to place the one which is a projectile now, next to at least other two of the same type from the plenty in the top side of the game screen so that way you will match at least three of the same type, colour and flavour, so only this way you can make them vanish and this is the most importantly. The goal is to make as many donuts to disappear so the more vanish, the higher is your final score. Increase your score and pay close attention to every single detail, in order to become a professional shooter and then, show off to your friend with your special high score!