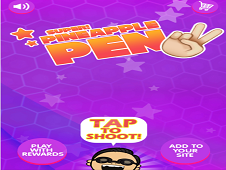 What is Super Pineapple Pen 2?

Pineapple Pen was a viral on Internet not long ago and you can feel its effect even now. This special and so cool ability and shooting game, offers to you the chance to deal with those special missions, where you have to slice some fruits, different fruits and vegetables, with the main purpose of getting to the next levels, as soon as you can. It's so important for you to pierce the fruits with your pen, so this way you will win but the fruits won't give up only from a single shot so you have to aim and shoot the fruits with as many pen shoots as you can but if you touch another pen, already pierced in the fruit you are aiming, you risk to lose the whole mission of the game. Focus on avoiding this and make sure that you won't have any problems in this special shooting session. Also, there will appear different obstacles meant to make you fail so dodge them with the pens and make sure that you will either shoot only the fruits themselves. The fruits will be spinning so it won't be actually easy for you to catch them with your pen so in the moment you've missed, touched an obstacle or another pen, you've instantly lost!