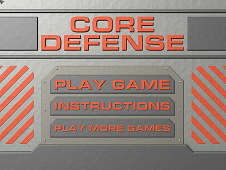 What is Core Defense ?

There is a special base, with a core inside of it, which has so many things to protect but especially that core which is so precious and valuable. Your goal, in this special and so incredible mission, is to use the arrow keys in order to move your powerful flying ship and the arrow keys to adjust its direction and of course, with the mouse, you will also aim and shoot the other ships, trying to invade the top secret base, with the core inside! In the top right side of the game screen, there is a radar which indicates you all the time where is your base attacked so you must move your ship as soon as possible there, in order to make sure that you will be able to defense the core in time and without any problems to stop your from achieving your final goal. It's so important for you to defend the core with the price of your life so use the mouse to launch a couple of missiles to the opponents, killing them all before there will be too late. The game is divided in waves so the higher is the wave, the more difficult is the level of the game you've reached so there will come more and more opponents but you remain only one. Good luck and defend anytime that core with your power!