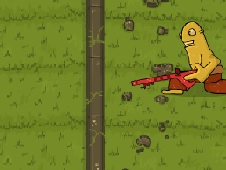 What is Alien Anarchy?

It was a normal day for you, as an alien in his space ship, until your ship crushed on Earth. You are immediately surrounded by human troops, who try to destroy you and your fortifications you have built in order to survive. You have to protect yourself from the humans who want to harm you using a shotgun. Military troops are going to come your way at each level. There are various types of soldiers coming for you. Machine gun soldiers, melee attackers and bosses, who have a very large amount of health. Each level consists of multiple waves of soldiers coming at you. Defeat all of them in order to advance to the next level. You have to put the red aim on each of the soldiers in order to slay them. Be careful because the range of your gun is limited. If you pass this limit, you will be shown a second aim, which means that a soldier is out of your range. On the bottom bar you have the health bar of your fort. When it reaches zero, you lose. Some soldiers will drop items. At the end of each level you will be able to craft these items in order to obtain new ones, useful for upgrading your weapon. These upgrades consist in faster reloading, range extension and many others. Play this game and survive the humans who try to catch you!

Use the mouse to aim