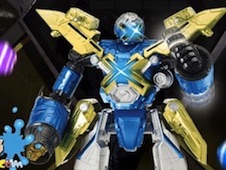 What is Mech X4 Candy Shooter?

If you are looking for fun, you have found it because in this game right here, as you can see, you get to play with the Mech X4 characters who are always ready for a fun and adventurous new game,but this time you are not going on an adventure with the Mech-X4 characters, but we can promise you that this game you get to play is as cool as all the other ones. You can see from the title of the game, Mech-X4 candy shooter, that it is a bubble game, but the difference is you are not going to play with bubbles, you are of course going to play with candies and this will make the game only sweeter. This fun Mech-X4 game can be played in two different modes, you can choose the arcade game in which the candies are slowly lowering, which makes the game a little bit difficult, but if you use the candy cannon to make them pop and you reach a certain score, they will all drop. The classical game has the same rules, but the candies will drop only when you reach a certain number of moves. Good luck!