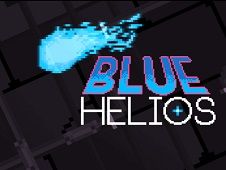 What is Blue Helios?

Blue Helios is the most recent super fun 2018 game here on our webste from the Adventure Games category and it has such an interesting and exciting stor that we could not helped but play it and we think you are gong to also like it a lot, so lets start talking about this interesting game. It seems that Planet Quark used to sustain a prosper and flourishing civilization of plasma people but one day a giant discharge og energy from a supernova stroke the planet and caused mayhem. Despite the physical capabilities of the people to support and absorb a high quantity of enegy and remain unharmed, this even caused their HIGGS cells to fail catastrophically. These cells keep their diffuse cells together and able to manifest as a unity, but now all of this is in danger. In this peculiar event the life of a misfortunate inhabitant, Helios, changed forever. His body received excesive amounts of energy and now he is caoable of doing extraordinary things with his body. If you want to see what exactly, just play this ganme/ Good luck!

Use the ARROW KEYS, the A and D keys and the SPACEBAR.