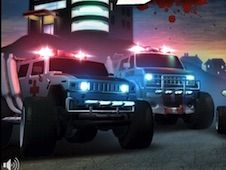 What is Mad Doctors?

Dear friends, Mad Doctors is the mostrecent game that our team has prepared for you today on our website play-games.com and we have to admitt that we are super excited about this new game because we really think you are going to like it a lot. It is called Mad Doctors because, obviously, you will have some doctors in the center of attention as main characters but also it seems that this game comes notonly from the Doctor Games category but also from the Car games series, it seems that the mad doctors are mad drivers as well because in this game they will start the engine of the ambulance and accelerate it until you will get to the hospital. In this game it does not matter how many people get killed by the car, or by the ambulance because this is why they are called mad doctors and it does not even matter how much damage you made tot the city or even to the ambulance! Your mission is to race this mad ambulance with those mad doctors and do as much damage as you can. Good luck.

Use the ARROW KEYS.