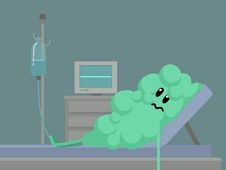 What is Dumb Ways To Die Original?

Dumb Ways To Die Original is a skill game in which the player has the power to decide what to do with the life of the main character in the game, can kill him, defend him or help him be better, bigger or more strong. Dumb Ways To Die is depicted at the beginning of the game with a blue character, which resembles a slender leg.

After the train leaves the station you will be left alone with the main character of the game, and the first mission is to run as fast as you can by clicking the mouse to help the main character survive. The second mission is to destroy the asteroids in space so you don't crush. The third part of the game will make you move quickly because you have to stay away from the big bear that eats your head if you fail to defend yourself. The next thing you will need to do is use a needle and stitch and sew a wound that our character has in the body.

After you have collected enough points you will be able to unlock a new character in the game, Pillock who is very fluffy and green. Watch out for the piranha fish that are in the water, try to jump as high as you can and save yourself, and in the 3rd part of the game you will have to memorize three geometric figures and then reproduce them when you want to earn points bonus.

The multitude of ways to die in the game is very varied, which is why you will have to pay close attention to all the objects and obstacles in the game. Each character in the game will unlock only when you reach the minimum point threshold, the first threshold is 150 points, the other two 300 points and so on.

How many points did you make?