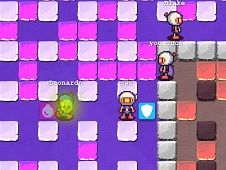 What is Bomberman IO?

The Bomber Io game is ready to be played right here on play-games.com, where dear children you can see that we have for you the Bomberman and IO games categories, in which you can gain a lot of points by making sure that you defeat as many opponents as possible.

We are sure that at least once in your life, you have played a Bomberman game, and so today dear children you can see that we are bringing a new online IO game, which means that this Bomberman challenge is going to be a new multiplayer online game for boys, in which you can plant bombs and defeat your opponents from around the world. This Bomber IO game is the very first online multiplayer bomberman game for kids, so you can even invite your friends to play together, because you will have several lifes and you can switch with your turns.

In this new Bomberman game, your character is going to be the classic Bomberman character that looks like an astronaut, but you will have different colors so that you can see which is your character inside the Bomberman maze. If you are bored of the character and be a little out of the ordinary, you can see that with your progress, you can unlock other characters such sa an alien, a robot with a tie, a smaller and thinner robot, an angry chef, a droid and many other types of Bomberman little characters that you will have to control the same and plant bombs all over the maze.

You will have to be very fast in this game, because as you know, inside the Bomberman maze, you will have to avoid all the dangers such as enemy bombs planted by the other players in order to win their battle against you, so you have to make sure that you are the player who plants the bombs strategicaly in order to gain points and that you can find as many tokens and upgrades as possible for your bombs and your characters at the same time. Each bracket that you destroy may hide one of these upgrades, and if you find them inside the level, you will not have to pay extra money or points for they to be used during the level. Your upgrades for the bombs can to plant more bombs in one turn, to have higher blasts for the bombs or to be hidden bombs that your enemy will touch and so they will be triggered. Your Bomberman character will have upgrades as well, and you can find different shoes that will make you faster and even shields that will protect you from enemy bombs.