The Power Of Math 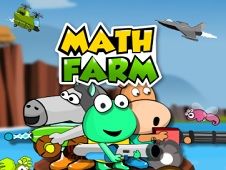 What is Math Farm?

Math Farm is a new simple math game in which you will have to put your mind and math knowledge to work because, based on them you will be able to win a war against insects and monsters from the animal farm. The game is an educational one, on several levels of difficulty, in which you will have to answer as quickly as possible the different questions of general culture in mathematics, in order to shoot with the weapon you have.

In the center of attention, we will find a horse (gray), a frog (green), and a cow (orange) with which you will have to build the necessary strategy that will lead to winning the trophy. The game has three major levels, one on the water with 20 objectives, the other on land with another 20 missions, and finally the last level with another 20 different levels.

use the mouse to answer.