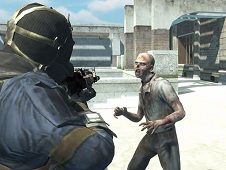 What is Zombie Defence Team?

You are a lone soldier with only one mission, kill the zombies. This is a new zombie defense game where you are tasked with multiple missions, the first one being to kill all zombies in the area. It won't be easy though, the zombies are out there to get you! Don't let them hug you, it won't be pleasant, we assure it. You have multiple weapons at your disposal, the first being your pistol, which has lots of ammo but it fires slowly so be careful when using it; the second being your shotgun which is very powerful at short range but doesn't have a lot of ammo so use it sparingly; you've also got your MP5, which is a well-balanced weapon good for short and long-range; next you've got your trusty AK47, this is a powerful weapon that kills zombies in seconds, careful though it has a lot of bullets spread thus you need to shoot it in shorter bursts; last but not least you have the M4, which is a more accurate version of the AK47 with similar power. As a last resort, you also have a melee weapon.

The first area you'll have to defend is a mansion that has a big fountain, a garage, and has lots of space. Zombies will appear from every corner your eyes can see be it from the garage, the mansion, or from outside. Killing the zombies is simple as 1-2-3, point your gun and shoot them, preferably at their heads, shooting their head will result in them instantly dying and you will get a cool slow-motion effect when doing so. On the map there are crates and other things you can jump on which can make killing the zombies much easier, having high ground is a good tactic against the zombies. The mansion has 1 floor where the zombies can hide and come out of, you must be able to avoid a huge horde of zombies because they can easily kill you.

In case the zombies get you, you die and you will have to restart the mission, hopefully, this time you will be able to defeat the zombies! Are you ready to defend yourself from them? Let's see!

Use WASD or the arrow keys to move, hold shift to run and press ctrl to crouch. Use the mouse to point and shoot with left click. Use the number keys or the scrolling wheel to switch between weapons.