Piggy in the Puddle

Piggy in the Puddle 2 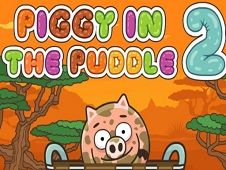 What is Piggy in the Puddle 2?

In this second adventure of Piggy, we again have to help him get into the puddle! This time we are in the savanna, and we will have to solve the puzzles to get Piggy in the puddle. In order for Piggy to fall into the puddle, you must use the help of the various animals found in the savanna. Some animals can pull while others can push with their legs, some can even break certain blocks while some can form bridges for Piggy to pass over obstacles. Piggy has 2 forms that can be switched, in his square form he stays still and he becomes hard to move, in his circle form he is free to roll and is easy to move.

There are many obstacles that Piggy has to overcome, such as spikes and blocks that block your path. You will have to use the many animals found in the game to overcome these obstacles such as the monkey that pulls you up, the cat that makes a bridge for you with its legs, the rhino that can break blocks, and many more. Sometimes the puddle isn't in a favorable place so you must use the animals to bring it to where Piggy can fall into it.

In case you fail to deliver the puddle to the correct place or piggy falls into the spikes, you will have to restart the level from the beginning. Also, try to collect all acorns. Let's see Piggy playing in the puddle!

Use the mouse or your finger.