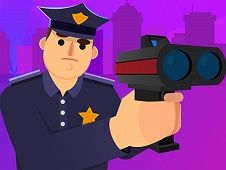 What is Lets Be Cops 3D?

Have you ever thought about what it's like to be a cop? If you want to know what it's like to be a policeman in real life, we suggest you try the new game in the category of policemen in which you will have to enter the role of a traffic policeman, the one who stops cars, controls their documents, gives fines to drivers who commit crimes and also starts chasing cars that do not want to stop, thieves or robbers.

In the first phase, you will have to sit in the police car, and with a speedometer, you will have to see which cars are moving at regular speed and which are not. As you can see, on the left side of the road you will notice a speed limiter, which limits speed to 40 km / h. In general, the drivers who come to you will move at a regular, legal speed, but some of them will try to exceed the speed or even commit criminal acts, at which point you will have to fight back and try to sanction or stop them. to enforce the law.

In your help, you have all kinds of objects and things that will help you get through all the missions you have. First of all, you have a radar gun, after which you can go out with the car on the road and block it or even throw a chain with spikes that would break the car's tires and thus forcefully stop it. After you stop it you have several options that you will have to apply depending on how you consider it.
The first option is to let the person stop, as it is not a public danger, the second option is to apply a warning or a fine, and finally, you can even arrest him, handcuff him and seize the car.