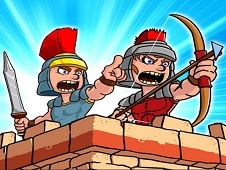 What is Empire Rush Rome Wars?

The newest Tower Defense strategy game is created in memory of Rome's historical fighters when battles were fought with medieval weapons as well as swords, knives, axes, arrow bows, and rarely rifles and machine guns.

The Empire Rush Rome Wars game perfectly illustrates the war between the human forces of the years 1700-1800 against the zombies, the monsters that you will have to eliminate in order to gain more experience and power in the war in which you are the chief general. In order to win the battles on the front, you will have to build an army as fast as possible, using the money you would have in your account. For starters, you will have only 200 coins with which you can buy 10 soldiers with swords, or 5 rifles, or even two grenade launchers.
After you manage to pass the first level you can buy more powerful soldiers with more powerful weapons and even special attacks, which you will have to use to mass destroy the monsters that are heading towards your base.

Pay attention to the objects that appear in the game (chests, stars, or pennies), try to collect them so that you can improve your position in the war and develop your army as much as possible.