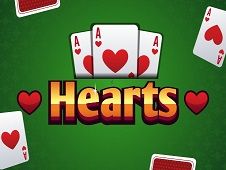 In this classic card game, the goal is to get the least amount of points. The game ends when all of the cards are played and the player with the lowest score wins. At the end of each hand, the players count the hearts they've taken and also the queen of spades if they have it. If a player takes all of the hearts and also the queen, they won't get 26 points their points will be reduced to 0 and each opponent scores an additional 26 points, this is called "shooting the moon".

The game ends when someone reaches a total of 100 points. The trick is taken by the player who played the highest value of the leading suit, the other players must follow the suit of the leader unless he is unable to do so. The player that leads cannot play hearts unless "hearts have been broken" was played before his turn. You start the game by passing 3 cards to the person next to you and the other players do the same too until you get 3 cards from the last player.

If the player is void of the suit that is led, a card of any other suit may be discarded. Although if the player has no clubs when the first trick is led, a heart or the queen cannot be discarded. The highest card of the suit led wins a trick and the winner of that trick leads next. Also, there is no trump suit in this game. The winner of the trick collects it and places it face down, hearts cannot be led until a heart or the queen of spades has been discarded, also the queen does not have to be discarded at the first opportunity and can be led anytime.