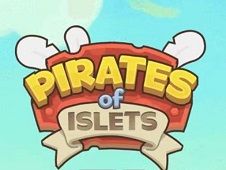 What is Pirate Islets?

Pirate Islets is a game where you throw your pirate character on small isles that rotate and have a round shape. On each run, you will find coins on the levels that you can collect by timing where you throw the pirate. You can also find items that help you in your adventure, tailwind that accelerates the isles rotation which saves you time, resurrection potion that resurrects the player if he falls, the trefoil maintains your combo which allows you to earn more coins, and the missing time item gives you an extra 10 seconds to your time.

There is a timer at the bottom of the screen that if it runs out, will end your run. You can of course extend that time with the "missing time" item. There are multiple characters available in the game such as Captain P, he is the most basic character and the one you start with and he doesn't have any abilities. Other characters cost money, they start from 3000 coins and cost up to 9000 coins.

The next character playable in the game is Sparklet, she is Captain P's niece and she accelerates isles without using the tailwind. After her we have Hook, Sparklet's uncle, he can retain the combo without using the Trefoil, apparently, he also likes apples. Next, we have Leavend, a kind cook who likes to cook saverkraut for the crew, his ability is to give you extra time with "Vanished Time". Lastly, we have Cruitch, a skeleton of an old pirate One-Eyed Joe, he is always resurrected by mistake, his ability is that he never dies.

The game features 2 maps, the first one is free and is the map you start on called the "Sugar Beaches". The next map is the "Bay of Truce", this map gives you extra time but also costs 10000 coins to buy. On the maps you may find different types of isles, some are clean while some have grass, moss, bones, and other elements.  Some spin faster while some spin clockwise while others counter-clockwise. You may also find chests that give you multiple coins at once. You may also encounter obstacles such as bombs that decrease your time by 1 second for each bomb you touch. You may also fall into a cannon that shoots you upwards, often shooting you into a lot of coins.

Are you ready for your pirate adventure? Say Yarr if so!