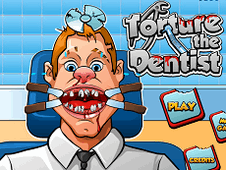 What is Torture The Dentist?

A new game for children cakes, where you have to try to torture getting louder dentist, doctor that initially you have to catch him. First you will have to run after him, then depending on the bonuses you get will have to try to jump, to run repde just catch him. If you can not catch it the first dentist that you did so bad, so much suffering will have to try to run again just to catch him and prove that we're able to pass all levels of difficulty reaching it eventually. After you come you will have to put the dentist chair, where you have to get all the tools and try to torture him until he can, to start to cry. If you bleed should not be sorry for him because he has traumatized many patients. Drill, needles, syringes they use in the new game will be sterilized and tried to do everything you can to make it worse for you mind as much as the dentist every time you struggled so much while See a doctor.

use your mouse and try to torture your dentist.