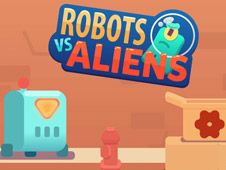 What is Robots vs Aliens?

It's time for battle in the new strategy and war game online of our website called Robots vs Aliens, which is a brand new action-arcade game of the highest quality that is also mobile-friendly which we recommend, where you are the commander of a squad of robots having to do your best to stop the alien invasion, battling them until they stop their conquest!

Learn how to command the robots and achieve victory against the aliens right now and here!

In front of you, there will be a robot panel from where you can set up bots on the field, but at the start, you only have a basic robot available. Next to the panel, there is a navigation slider that allows you to navigate the field where the battle takes place. You can also see the funds you have available, and you can earn more coins after defeating aliens and grabbing the coins they leave behind.

You have to keep destroying the aliens until the meter is full and their wave of attack has been completely stopped and remember to protect your lives because losing all the heart icons means losing the battle, and the war. There are multiple tracks on which the aliens attack, so place robots in their path to defeat them.

You always have to focus and give it your best so that you don't get overwhelmed by aliens, so make sure to keep putting out more robot soldiers. Good luck, and we hope to see you have fun with even more of our new games of the day after this one!