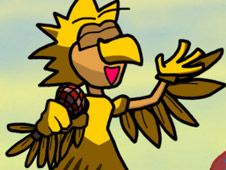 What is Friday Night Funkin’ Vs Canary Mary?

We are very excited that today is going to be yet another day filled with new FNF mods online for you to play free of charge on our website, and we’re starting off with Friday Night Funkin’ Vs Canary Mary, the first mod featuring the Canary Mary character, about whom we tell you more right now and here, in case you’re not familiar with her.

Who is Canary Mary?

Canary Mary is a character coming from the universe of Banjo-Kazooie Games made by the studio called Rare, and she is a canary bird by the name of Mary against whom you race, and while she was a minor character in the series, she is a serious protagonist in this mod. She looks just like a bird, is fully yellow, and has a yellow beak with which she is going to stab Boyfriend if he does not win the musical battle.

How to play the Vs. Canary Mary mod online

She is the primary antagonist you have to help Boyfriend defeat in this game, and you do so by having good rhythm and pressing the arrow keys when the floating arrow symbols from the screen are matching, and you hit all the notes to the song correctly. Doing so wins the match, but if you make too many mistakes, and have too many misses, you lose and have to face off against Mary again.

Good luck, we hope you win, and we hope to see more of you, since it would be a shame not to play the other new FNF Games we’ve prepared for you here today, all for free!

Mod by:
GameWorld1 (did stuff)
BulbyVR (made fnf modding +)