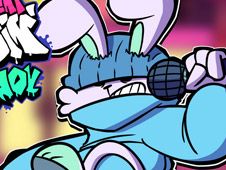 What is Friday Night Funkin' Vs Randy Mod?

It is with great delight and excitement that right now we get to offer you all a brand new FNF mod to enjoy on our website, not the first of the day, and certainly not the last, and the new game we're talking about is called  Friday Night Funkin' Vs Randy Mod, which features a new original character that you have to battle against.

Who is Randy from FNF?

This new mod character is a white rabbit that wears a blue hoodie and has a blue beanie with holes in it for his bunny ears to go through, and who wears a skateboard in one hand, and the microphone in the other one. He replaces Daddy Dearest in the mod, and his new custom song is called Hop 2 It.

How to defeat Randy in a music battle:

What you have to do for this new duel remains the same, which is to help Boyfriend win the rhythm competition, so make sure you press the arrow keys at the right times to hit all the notes and don't have too many misses in a row, because that happening means that Randy overtakes you, and you lose the battle.

We recommend you choose a level of difficulty you think you can handle the best, and we want to wish you all good luck, inviting you to start playing the game right now!

Use the arrows to defeat Randy from FNF.