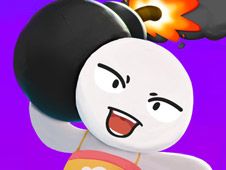 What is Bomb Prank?

Next up on Play-Games, you are about to enjoy one of the newest multiplayer action games 3d, with a format unlike most other ones you've seen here before, which tells us you are going to enjoy it quite a lot, just like we did because otherwise, we would not have been sharing with you the game called Bomb Prank right now.

As the saying goes: don't sit around with a bomb in your hand!

In this game you have an arena on water, where you are going to join two other players, with one of you being dropped a bomb to hold, and you will each try to hand off the bomb to another player so that when it explodes, it explodes in their hands, and they get eliminated, and you do this until only one player is left standing.

To move around the arena you use only the mouse, but be very careful not to fall in the water either, since that also means you lose the game, so move swiftly but carefully at the same time!

Winning matches earns you coins, and you can, later on, use those coins in the shop to buy new skins for your stickman and give it a brand new look that you enjoy a lot. Good luck, and have fun, as always!

Use the mouse to move around.