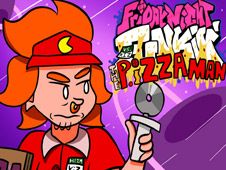 What is Friday Night Funkin' vs Kiz the Pizza Man?

Let the new FNF mods keep on coming, that's what we say, and we also do, which is why right at this moment we offer you a brand new one to enjoy and have lots and lots of fun with, the game being called Friday Night Funkin' vs Kiz the Pizza Man, and it being a cool new modded game you will surely enjoy here a lot, just like you all the new antagonists this series comes up with.

A music battle for pizza between Kiz and Boyfriend

Boyfriend ordered some pizza because he was very hungry, but when Kiz, the delivery man, came to his house, BF realized he does not have any money, but he still really wants the pizza, so he thinks that the best thing to do would be to fight one another in a musical battle, and if BF wins, he gets the food. Help him win, you don't want BF to be hungry, right?

How to play Friday Night Funkin' vs Kiz the Pizza Man

Firstly, know that the new track featured in this game fits with the theme of the game a lot, as it is called Pepperoni. If you hit all the notes properly and take over Kiz, you win the game, but having too many misses in a row will end up in Kiz's victory.

Press the arrow keys at the same time that you see their on-screen symbols are matching, and not one second later or sooner. Pick your level of difficulty, choose between the story mode or free play mode, and then let the fun begin at once!