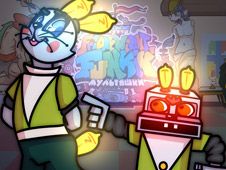 As proven by this new game called Friday Night Funkin Soviet Cartoons, FNF Games have become a worldwide phenomenon, since we now even have mods that feature animated character coming from former Soviet Russia, showing how large of a fanbase this new epic game genre has, and how many great versions of this game can be discovered daily on our website!

Meet the Russian cartoons that Boyfriend will challenge

Herra Huu is a spirit that looks like an old man and has shiny yellow eyes, who lives in the forest and is its guardian, but he can be very scary and has even threatened to boil kids in a cauldron! Rabbit-Robbot, just like the name suggests, is a mechanical robot who might seem really cute at first, but it can be quite vicious, believe us!

To defeat these two Russian cartoon characters you need to have better rhythm than them, something that you will have to prove on several custom songs, one funkier than the other one! Press the arrow keys when the arrows over Boyfriend match with one another, and not one second later or sooner, if you want to hit all the notes right.

If you have too many misses one after another, you lose and have to start again, so don't let that happen! Good luck to everyone, and we really hope to see you around, playing even more of our daily new FNF games!