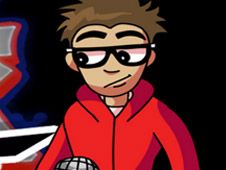 What is Friday Night Funkin' vs Puff Puff?

Today is going to be a never-ending adventure into the world of new FNF mods online, and once again we are very happy to present you with a brand new addition to this series, and that is the game called Friday Night Funkin' vs Puff Puff, where each and every one of our staff members had lots of fun, so why would you not enjoy it plenty as well?

Your Favorite Martian was a cartoon band created by a comedian back in 2011 which lasted for a year, and one of its main members and soloist was Puff Puff Humbert, who has now returned to the world of music and is challenging its new king, Boyfriend in a rhythm battle, so help BF take him out! Puff Puff has spiky brown hair, wears glasses, and is dressed in a red hoodie and blue pants. Nerd-Rage is the name of his custom song you are challenging him in.

How to play FNF mods online like this one:

If you're experienced with the series, you know all that you have to do, but if you're one of the young bloods, let us teach you the game's format right now and here!

You will have to hit the notes at the exact same moment that the on-screen arrows match one another, so hit the same arrows on your keyboard at that moment, no sooner or later.

Take the song to its finish and turn the bar green, in your favor, but don't have too many misses, or you will lose the confrontation. Good luck, enjoy, and hopefully, you stick around for even more awesome games of ours!