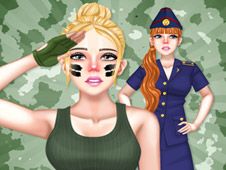 What is Princess Military Fashion?

Women love a man in uniform, but girls in uniforms look just as good, which is why some princesses thought it would be a fun idea for their next makeover party to dress up as military officers, and we're sure that you will bring great style into the uniforms of these girls who want to be soldiers, right now and here, by playing our new game called Princess Military Fashion.

For each of the two girls featured in this game you will start off by applying makeup on their faces, which is not that prevalent in the military, but since they're not actually real soldiers, they get a pass and get to use it to make themselves look even better. From this stage, you can use eye-shadow, as well as lipstick in the colors you like most, throw some war-ready face paint on them, and pick their hairstyle too!

You will then browse the wardrobes and choose the soldier uniforms that you like the most, some of them coming as complete outfits, but you can also mix and match trousers, shirts, or jackets, and you will also pick their footwear, and add accessories such as hats, glasses, or even weapons.

It's that simple for girls to have fun here, so do it right now, enjoy, and stick around for all the other cool new games of the day, you don't want to miss out on them!