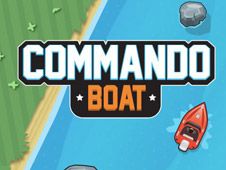 What is Commando Boat?

Action games with boats are one genre of games we would like to have more of on our website, which is precisely why we try to bring you as many of these new games as often as possible, just like it is happening right now and here, when our team has added the game called Commando Boat, where you are about to have tons and tons of fun, and we will explain how immediately!

Take on the waters with your military boat!

To steer your boat on the river or other kinds of waters you might find yourself on, use the arrow keys. As you proceed, make sure not just to avoid obstacles on the course, such as rocks, but also to shoot down enemy boats, gaining points in return, which you should also do by collecting as many coins from the courses as possible.

Try not just to make a big distance, but also get a bigger score, which you will then be able to use to buy upgrades for your boat and make it bigger, better, faster, and stronger! There are also power-ups along the water that you might collect and help you in that. To shoot down enemy boats, press the spacebar.

There are also ramps that you can drive on to get speed boosts and make jumps! Good luck to you, let the fun start right away and don't hesitate to bring your friends over, we're positive they will love the games they get to find here as well!