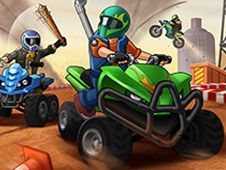 What is Rude Races?

The more action does a racing game online have in it, the more we want to bring that game over to our website, which is the reason why right at this moment we're sharing with you all the game called Rude Races, without a doubt a game you should be excited for since it has all of the elements boys would want from a cool new action game with cars!

Be rude and destroy all the enemies to win the race!

You will usually race against two other kart drivers, but the number of enemies can grow from one race to another, and as you proceed through the levels you will also see that the difficulty increases, so every new race you undertake you have to work harder than before! Use the arrow keys to accelerate and steer your kart, and with the spacebar you can attack, having a bat to use in the first race, but not only is there the chance to pick up weapons on the course but winning races allows you to get better equipped.

The reason for that is because you win coins, some of them also collectible from the course, so grab them, as well as any upgrades, and use them to your advantage. Of course, take out enemies, and watch out so they don't hit you, as well as avoid bumping into obstacles too much. Good luck, enjoy, and we hope you stick around for all the other awesome new games still to come!