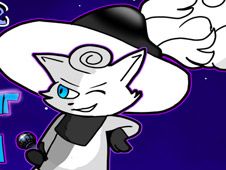 What is Friday Night Funkin' vs Dartanyan ?

Yes, it's once again time today to play some new Friday Night Funkin Games online for free only on our website, where we are always up to date with this category and make sure to bring forward some of the best games ever in it, which is why right now you are getting the chance to enjoy this awesome new game called Friday Night Funkin' vs Dartanyan!

Well, if you know a bit of literature, you know that he is one of the main three characters in The Musketeers, and he is the leader of the gang, only in this game you won't see the boring version where he is a sword-wielding man from Paris of the past, but instead a cat, with white fur and a big hat popular for the time of these warriors.

He came upon Boyfriend and Girlfriend on a bridge, and because he has been practicing his rhythm lately, he wants a shot at Boyfriend, so help our protagonist defeat him in the songs called Bridger and Slasher.

To win you need to get to the end of the songs and sing or rap all the notes of them, and you use the arrow keys to hit the notes. Press the arrows when the same arrows match above BF's head but know that if you press a wrong arrow or you miss the mark too many times in a row, you lose, so make sure not to let that happen! Good luck!